Event postponed until further notice. New Exhibition: Close The Door On Past Dreariness

Damien Wootten is a documentary and art photographer living in Gateshead. For over 30 years he has worked on a wide range of photographic projects and commissions and has exhibited work both regionally and nationally. In 2014 he won the Bronze Award in the Royal Photographic Society International Print Exhibition. Most recently he exhibited ‘The Radical Road’ project at Woodhorn Museum in 2018. 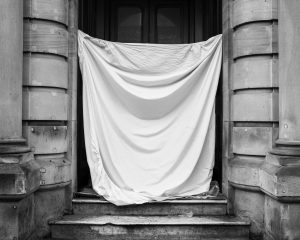 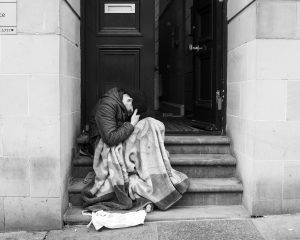 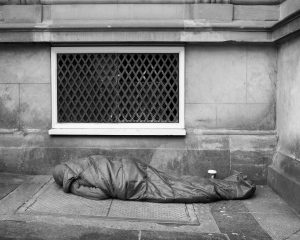 This exhibition is about the current homeless crisis in Newcastle upon Tyne – and it is one that reflects a national story. The number of rough sleepers has doubled in the past five years and 726 homeless people died in England and Wales in 2018 – at an average age of 44. The rise is in part attributed to austerity, benefit sanctions, the lack of social housing and the roll out of Universal Credit. The Conservative’s recent election manifesto made no specific claims toward preventing future rough-sleeping. In response to these stark statistics, and witnessing himself the increasing number of homeless people on the streets of Tyneside, Damien began photographing the homeless during the winter of 2017/18. It’s a subject and sight that has become so familiar that perhaps we no longer question the morality of a system that creates a situation where people live on the streets, and accept it as the norm. This exhibition hopes to raise awareness of the causes and problems associated with homelessnes – and the positive ways in which we can respond.