The city that never was

A Newcastle Arts Centre exhibition part of the Heritage Open Days by Mike Tilley exploring the history of proposed development of Newcastle and many forgotten plans of what could have been. Presenting ambitions for the City – good, bad and ugly. 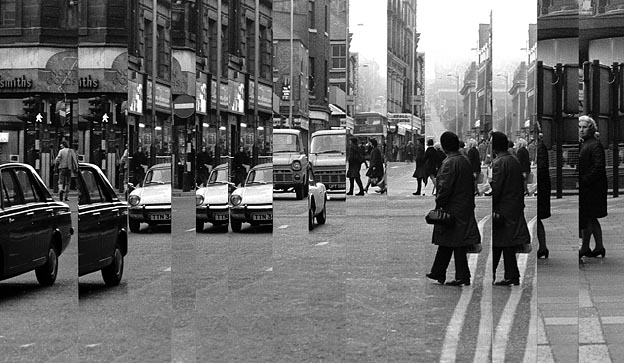 Late 1960’s Westgate Road Newcastle, one of a sequence of shots. This section of Westgate Road had 3 cinemas and the local slang was ‘flicks’. This image has been sliced to mimic fragments of a movie.

A personal view of development on Tyne Notes for an Exhibition

At Newcastle Arts Centre we hosted the ideas workshops for ‘Theatre Village’ in 1986 and in 1991 produced with Cyril Winskell the Riverscape exhibition for the Northern RIBA . This was followed by a contribution to the Bridgescape publication, and time with the ‘Planned City Working Group’ which met at the Civic Centre 2007-9.  Over the years I have come to understand that the construction and culture of our City is subject to a ‘chaos theory’ all of its own, and that few plans ever have the outcome the promoters expect. At times some developments appear to be a capitalist conspiracy, but outcomes, like the weather, are often outside any forecast. This is not to deny the validity of planning, but for some decision makers seeing the ‘big picture’ is often like seeing a tree as piece of wood that is not a living part of the eco system. People of each era have shaped Newcastle and left a heritage that they could not have foreseen. The Roman Wall, Road, Fort and Bridge may be long gone as monuments but they still shape the plan of the City and its image. Back in the 1840’s the picturesque and modern could be celebrated as one, but by the 1970’s modernism was perceived as uncaring and brutal, despite or maybe because of the idealism of its concept. Although it is clear that the rush to use industrial building processes often ignored the social needs and sensitivity of the community. ‘The City that never was’ shows different perceptions of what is, was, and could have been, – but most of all I hope to show a glimpse of the evolutionary process that shapes the city and its culture.
This project refers to – John Brand 1789, E Mackenzie 1827 , Collard & Ross 1842 , James Guthrie 1880, Charlton, the Newcastle Plan of 1945, Central Redevelopment – Wilfred Burns 1961,
City Planning :Newcastle – Kenneth A Galley 1963, Eldon Square City booklet 1964, A study in replanning Newcastle -Wifred Burns 1967. Tyneside – C M Fraser & K Emsley 1973.

Brazilia of the North